I’ve been missing my mom.

There was the initial relief that she was no longer suffering (and the constant stream of people and things to do after she passed away), but that has all subsided and I’m left with “normal” life. Only since my mom has always been a part of my daily life, even more so as her health deteriorated over the last few years, it feels very abnormal to be without her. Even when I first moved out to Colorado 20 years ago, I called her every day. And even at my busiest time with 2 or 3 or 4 kids to chase, my mom was the person that I sent my texts and pictures and told my stories about every little or big thing in my life. I took her to the doctor and the store and to lunch and to all of the kids’ activities. Rarely did a few days go by without seeing her, or hours without being in touch and checking in to see if she was doing okay. And now, there is just a hole. It’s a terrible feeling, that hole.

My mom told me at least 100 times that she would always be with me. She believed that we are more than just our bodies, and I believe that too. It’s brought me peace, truly it has. But still, I wish she could sit here with me and see the kids grow. Come over for dinner. Gather my articles and photos from the newspaper for me like she always did. Even in the nursing home, unable to leave the bed, she managed to collect them for me. I can’t seem to remember to go buy them for myself after all the years of her proudly collecting them.

So I was thinking about my mom and was starting to feel pretty sad about her not being here. And then I was looking through some old photos on my phone the other night. I don’t remember what I was looking for, but I was scrolling through older images and I came across some screenshots that I took of a Facebook conversation. It was in October, just days after my mom broke her pelvis, and it was the first time since that injury that she was on Facebook and commenting on anything. She was being very silly (and drugged on painkillers) and making all sorts of funny cat emoticons comments. Like this: 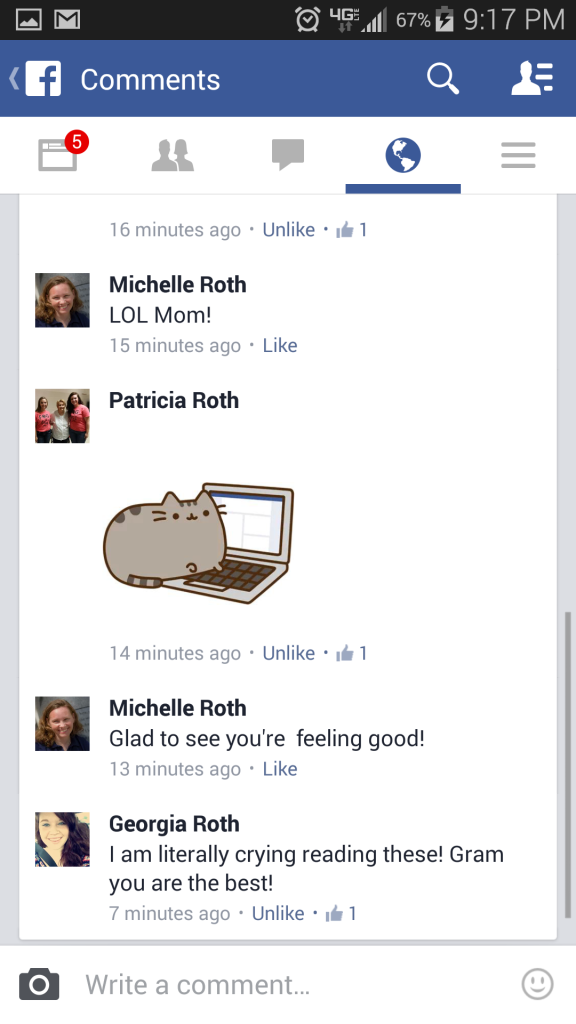 It was cracking us up, and my daughters and I were commenting back, telling her how glad we were that she was feeling better, and how she was making us laugh. She kept at it. 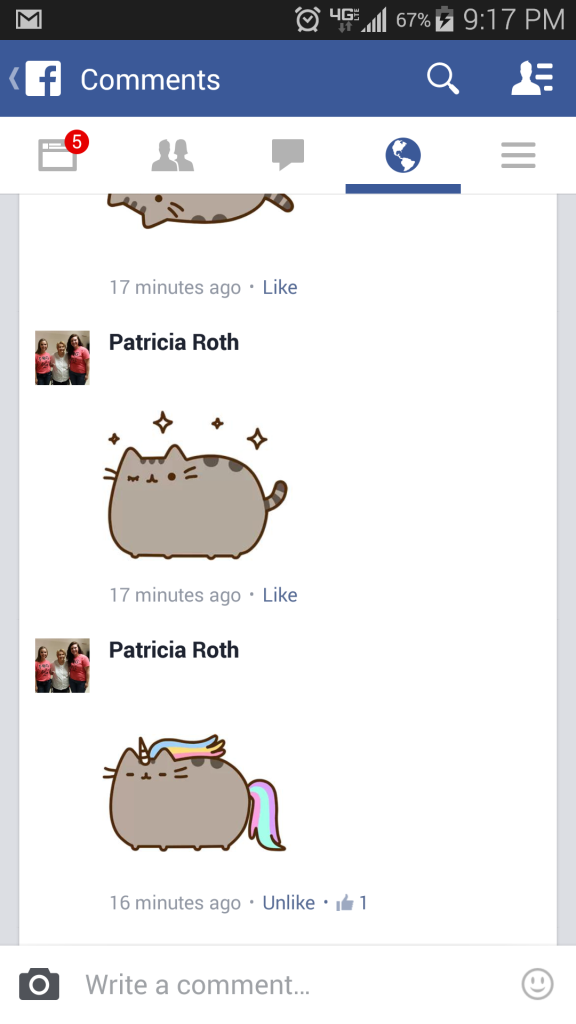 I saved three separate screenshots of the conversations. As you can see, they are of cats typing, playing dead and dressed up as a rainbow colored unicorn. Crazy stuff. (I mentioned she was heavily drugged, right? Cause pelvic fractures hurt.)

Anyway, I found those screenshots and I was giggling at them,  feeling better as I thought about how much I always enjoyed my mom’s sense of humor. About how even so broken she kept her spirits up, and ours. And how nice it was to find this little piece of her that I had saved.

But then I found this poem, right in the middle of the three screenshots. Not before, not after. In between. The screenshots of the cat emoticons all say 9:17, and the screenshot of the poem says 1:04. It’s of a totally different thing, and not even anything that I remembered seeing before or capturing. So I stopped to see what it was and to read it.

This is the screenshot: I’m sure that some technically savvy soul out there could go digging and find some “logical” explanation for how this happened and why a totally random separate screenshot that I’ve never seen before got popped in-between the three messages I took of my mom being silly at one of her last happy times. I’m sure there is some explanation. People love reasoning and things that can be categorized and easily referenced.

But I’m going to chose to think it is just my mom, stopping in and telling me that she misses me too. Reminding me that she is always here with me, and that I only have to stop for a moment and look, and I will find her.