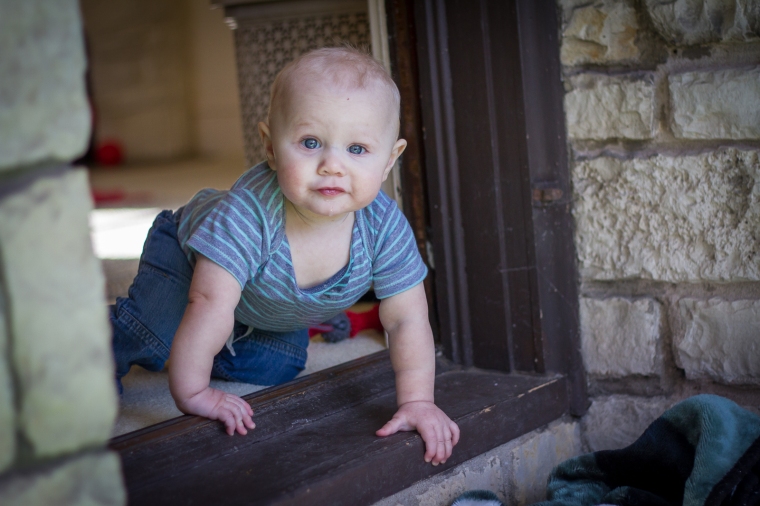 This is us, one year ago this morning.

7 pounds 6 ounces, my biggest baby by over a pound.

My longest labor by over a mile.

Lincoln felt like a baby horse inside of me rather than a baby human, so I wasn’t surprised to see how strong he was right after birth, lifting his head off my chest while we laid there skin to skin. Eyes open, taking it all in, not even crying. So much like he is today. My mellow fourth baby who got the memo that he is not the center of the universe, just an equal part like the rest of us. 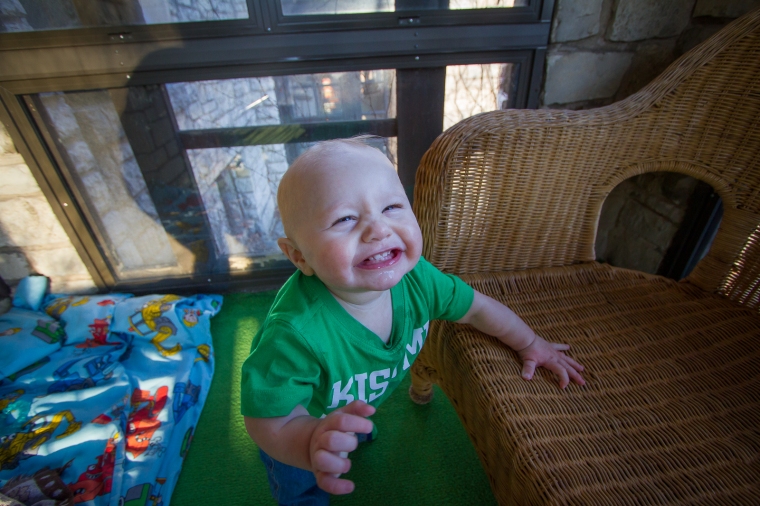 Lincoln is all smiles. He cuddles with pillows and pets and people. He is a charmer, a sweet, daring little soul who cruises the staircases in this house like a pro. He crawls from room to room, chasing cats and the puppy and dragging trucks along with him, calling for Brice. He thinks I’m the funniest person in the house, which is nice. All my other babies thought someone else was funnier.

I noticed a family of four out on a bike ride in front of our house this week while I was working in the yard. I counted their kids and thought, “Four kids. That’s nuts!” And then I remembered that I, in fact, have four kids and I felt kind of ashamed for judging, not to mention silly for not remembering. My life is just my life and I think that I get caught up in the living of it that I forget to keep track of details. Like how many children I have, apparently.

I remember when I was leaving Georgia to go to the hospital and deliver Holly, I was just convinced that I could not love this new baby as much as I loved Georgia. How could I? It didn’t seem possible, because we learn a whole new kind of love when we become mothers, don’t we? But when Holly was born, I realized- our love multiplies in direct proportion to how many kids we have, like magic. There is always more than enough. Even with four, there always seems to be at least enough. I may forget how many kids I have, but there is lots of love. 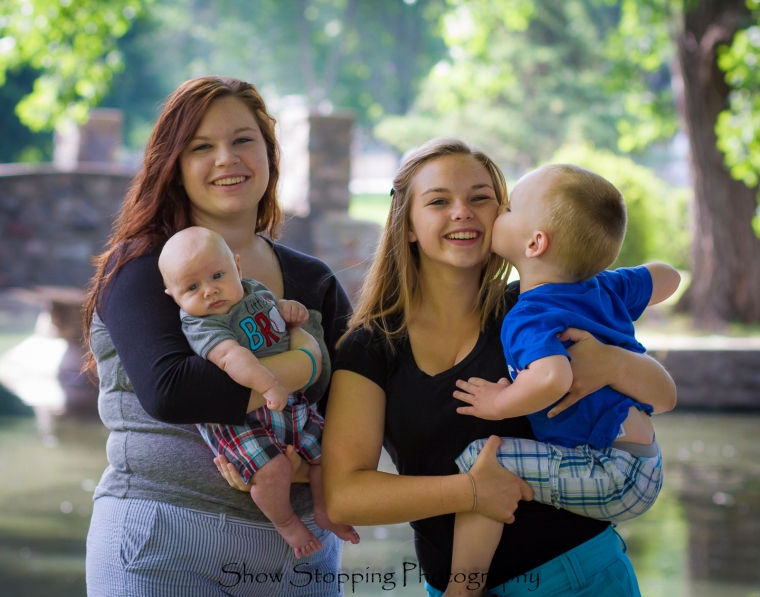 And though it feels that I am lacking sufficient time for it all, I try to remember that my life is supposed to be full of needs right now. Lincoln will only be a baby so long, and babies fill your days with moments. Messy moments, needy moments, tender moments. A baby fills your life and your arms. There is room for little else. As they grow, they play and explore more on their own. They reach out to the next room and then the yard, to friends’ houses and school and sports and activities, and pretty soon they have moved right out of your house and life. They create a life of their own. It happens in the blink of an eye. I know this.

So I play with the baby and tend to his needs and this fills my life. And I write a paragraph or few pages here and there. The book I’m writing waits more patiently than a hungry kid. Some moments this is easier to take than others. Writing is part of who I am. I miss it when I can’t get there.

But before I know it, the time will be there for me to write without interruption. I have done this whole baby thing enough times to know that the fog and storms of life with small children do eventually lift.

So for now, the computer sits open to Word, waiting for me to finish something. Lots of things. And it will wait. I nurse my baby. I celebrate the gift of his presence in my life. This little everyday miracle that I lug around on my hip. My fourth. Dare I say, my last? Watching him leave babyhood right before my eyes feels nearly bearable, even though it truly feels like it’s time to be done. The tradeoff of no longer having a baby in your arms all the time is that you no longer have a baby in your arms all the time.

Happy first birthday, Lincoln Thomas. I love you with my entire being and you fill my heart with joy. 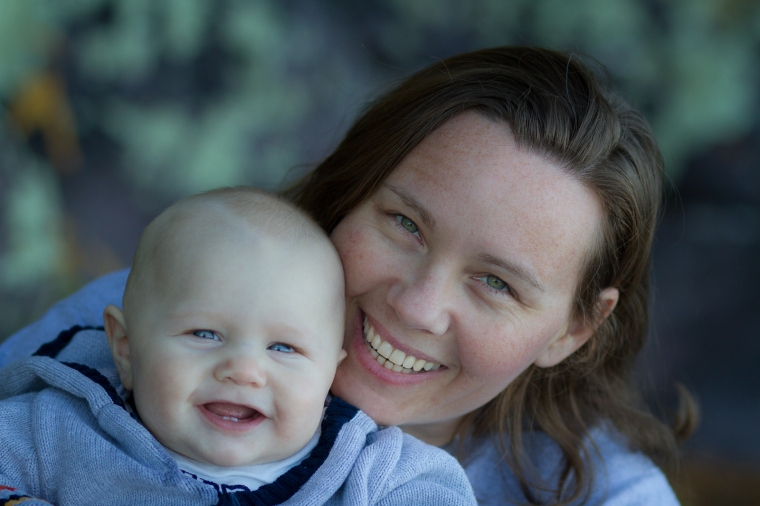 I’m not ready to put down my pencil just yet.

There are too many answers that I didn’t get.

I need a little less pressure

and a little more time.

I am trying to lead.

I am trying to learn what is true.

I’m trying to be what you want and I need

but we all have

a little more homework to do.”

We played this song at my mom’s funeral, because it fit her in so many ways. She was someone who gave people the benefit of the doubt, and a lot of space to be who they were because she believed that we are all works in progress. And this was the last song that she saw the girls perform in our high school auditorium. That was back in August, the closing number of the FOG show. After so many dozens and dozens of times that we sat in that auditorium together over the years watching the girls grow up one performance at a time, that was the final time. The last song. I was holding her hand and we were all crying, Steve included. It was Georgia’s last performance on that stage before she headed off to NYC for school. It was the final number of the first show that Georgia ever directed. It felt like a big moment. I remember that so clearly. I felt like a wreck for reasons that I didn’t fully understand in that moment.

So the song has lots of meaning already. I listen to it whenever it shuffles through on my music player (we bought some music to play in the background at my mom’s visitation. A funeral playlist, my girls called it. Sigh.) I realize the song means more now than just those memories. It’s interesting how time and space can give us so many ways to look at something.

The end of my mom’s life was hard. She was in pain and sick and suffering for the last 2 months of her life. She was having a pretty hard time before that, too. But those last months, I spent so much time going to see her in the nursing home. Taking her what she needed, brushing her hair and trying to help find foods she could eat. Paying her bills, making sure her medications were right. But mostly, watching her die. I knew that she wasn’t going to make it, even though nearly everyone had their hopes up. But I didn’t. She’d been talking about dying and her wishes for when she passed in detail for quite a while before she fell and broke her pelvis. I knew when it happened that we were in the final part of her life. We had reached the back of the book.

And that is how it felt, like I was trying to gleam some closure from that time, as if there had to be some answer there if this horrific thing was going to take my mother and make her suffer. But I didn’t see it, and time was running out.

I spent that time trying to follow her lead and let her feel what she was feeling, trying to take the lead and keep her spirits up and do everything that needed to be done. And then, when it was clear she was dying, trying to openly talk with her about that, since no one else really could handle her talking about her death except myself and my daughter Holly. And the dying need to have their say, I’ve found. Even if it’s just to talk out loud without saying much of anything except to acknowledge it all.

So I spent that time trying to be strong for her, telling her it was okay. Trying to figure out what the hell to do and how to make sure her wishes were followed. This is easier said than done with the current system we have set up for the dying elderly in nursing homes. To say they are cast off to die out of sight is an understatement. So I jumped through hoop after hoop and wished I had more time to spend with my mom and less on the phone screaming to get doctors or hospice or insurance to listen. Two months have passed since she died, and I realize now that my shoulders were pretty much attached to my ears during time, in a constant state of stress and anxiety. And how death, as sad and terrible and frightening as it was, turned out to be a relief.

I went out to my mom’s grave today. It’s her 69th birthday. The entrance to the cemetery wasn’t plowed so I just parked on the road and looked at where she was buried. I figured it was a sign that I wasn’t supposed to go stand there in the bitter cold in a spot where she isn’t and be sad. She told me that so many times. Don’t stand around feeling sad at some cemetery. I won’t be there. I’ll be with you, always. I have to believe her, and believe that she blocked that drive on purpose. So I told her happy birthday, I let myself have a minute to be sad and I turned my van around to go on with my day. I will make her favorite dinner for my family tonight. We’ll have cake and celebrate her life.

I still struggle that there has to be answer in all of this. We all try to avoid death so completely, as if getting too close may rub off on us and we’d rather just indefinitely dodge the inevitable.

But if there is something to be found in the back of the book, it seems to me that watching a parent die is a glimpse. We are all mortal. We have limited time here to live our lives. How do we want to live them? What are we doing with our day? Right here, right now, since that’s all we have anyway. And of course, the not-so-subtle reminder that we in fact have a life. And we should not stand around some lonely place feeling sad over what is gone. We should go out and live our lives.

Happy Birthday Mom! I hope there is cake.