We all know that the girl we are talking about was orphaned this past year and is in foster care, right? Because no one seems to find this relevant, despite how traumatic that must be. We have all faced the harsh blow that comes with the death of loved ones, but few of us have been orphaned. We don’t know what she’s facing right now.

She is new to Spring Valley High and is known for being quiet. I don’t know much of her past, but these things have all been confirmed by numerous sources. So, if you are looking to blame her parents, they are dead, so there is really nothing good that could come from that blame.

I’m confused that we find it more believable that every teenager should follow every single rule every time, but we make no mention of holding adults, highly-trained in their profession, accountable for holding their temper, or for not being able come up with reasonable solutions to problems. Why do we blame a child for misbehaving, but not ask why neither a teacher, a high school administrator, and a safety officer could not pool their minds and training and years of experience and find a better way to handle this?

I’m all for accepting responsibility for one’s actions, but we all need to be held accountable.

And is this is REALLY what you all think should happen every time a kid refuses to give up a cell phone in America? 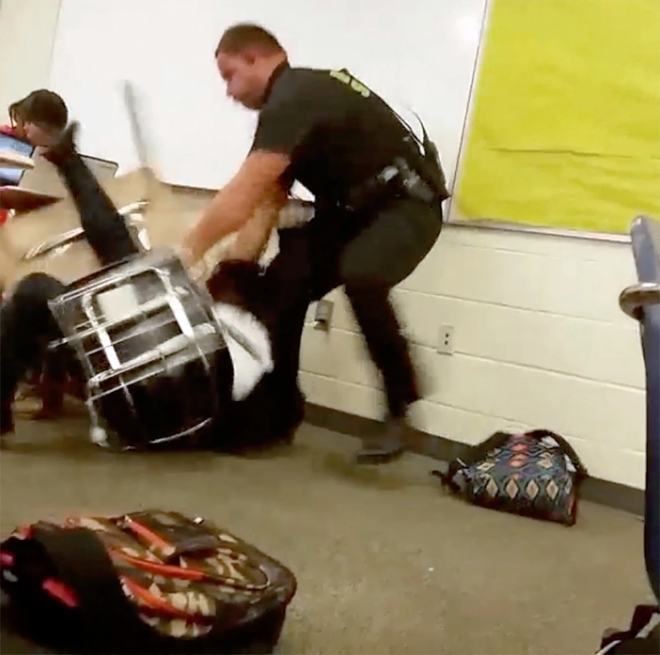 I spent a lot of last night thinking about the girl in South Carolina. My husband came home and we talked about it. Again. Another video. Another story we don’t know the whole of but still feel terrible about. Because people keep getting beat up publicly by police, and it gets shared with the world. And instead of it being a shock, it’s become normal.

And then there are people defending this. People so safe in their white skin that they can’t even see how unfair it all is. We don’t know the privileges that we have had by growing up white, or at least we can’t totally understand them. It’s all about perspective.

And that was what Steve and I kept saying was that we don’t know this girl. That we don’t know her story and that she was just a blur of girl being assaulted on a video that went viral. Yet there were so many nasty assumptions out there about her parents and how she was raised and how she was obviously so much of a problem to be so defiant. And how she had it coming to her.

This line of thinking- that an unarmed 16 year old girl deserves to be slammed to the ground repeatedly- it’s bullshit. It literally makes me feel sick to read that anyone could believe in their hearts that a kid deserved this. She was not a threat to anyone. She was being a brat and chewing gum and not putting her phone away like her teacher asked. Just like so many kids that I see when I visit the school, or from the stories that I hear from my teacher friends. This was not an infraction that needed to involve the police. And when it did, it escalated. I watched that video. The room is calm and kids are working quietly until the cop steps up to the girl. So I have to wonder what kind of disruptions she was causing if no one was even paying attention to her.

That officer has taken an oath to serve and protect, but he threw her around the room. A girl. A 16-year-old kid. Who, if you didn’t know, recently lost her mother and was subsequently orphaned. She recently moved to that school when she was placed in foster care.

I really don’t want to hear any more excuses about this being totally fine because of her behavior. Cause get this… I have teenager girls and they roll their eyes and talk snotty and tell me, “Whatever,” under their breath and don’t do what I ask sometimes. They are good kids who have never been in any trouble with the law or even the school. Not even a detention. I raise them as well as I can and they still get pissy-ass teenage attitudes. From all I’ve read, this is a growth and hormonal teenage thing and it’s normal. And my kids aren’t half as bad as so many out there. I’m often shocked at the behavior of the privileged and popular (and white) kids that I run into with photography or kid’s sports. There is some real nastiness out there in the teens. They are hormonal and they act out.

This girl wasn’t a threat. No one needed protection from her. So what that “safety officer” did is assault. He is supposedly highly trained to diffuse situations, to handle children carefully, especially when they act out. This is his job.  Truly. His job.

So why was this guy (with a seasoned history of inappropriate behavior) in a freaking school? And since when do we call the police when a kid won’t put down a phone. How about the teacher just ignored her ass? Let her sit there and Twitter and not listen. Really. What’s the harm in that? Take her aside after and explain the consequences. Give her an F for the day, give her make-up work, or give her detention. But I can’t imagine needing to call the police EVERY time someone refuses to set down their cell phone. How would anyone get anything done?

If I called the police every time one of my kids didn’t listen to me I’d have to hire one full-time.

And if I did what that officer did to one of my kids for their bad behavior, I’d be in jail. Just like that officer should be.