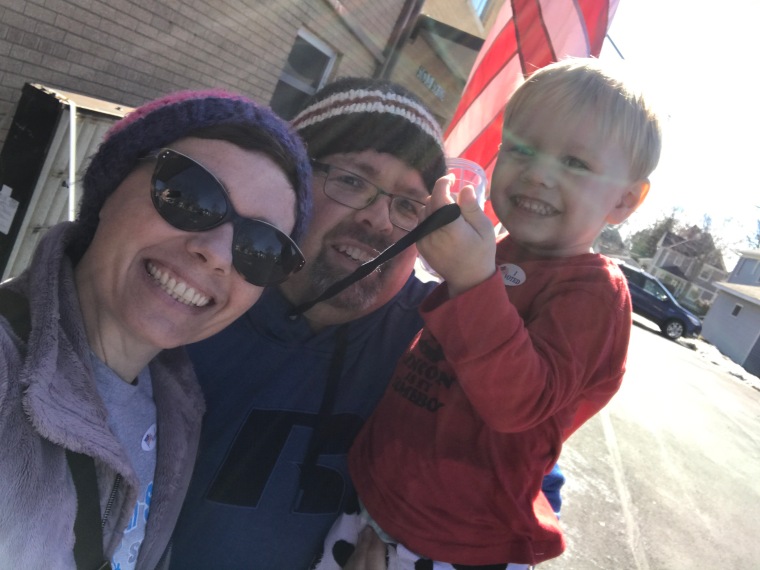 Family voting for Wisconsin Education Superintendent. Voting happens more than once every 4 years. And every vote counts.

I was thinking about that day back in November when we all voted.

My timeline filled up with nearly 100 women posting photos of themselves with their “I voted!” stickers, and the accompanying hashtag #Imwithher.

And what a proud day everyone thought that was going to be for women and for America.

And here’s what I said, out loud, to my husband. “Hashtag It’s Too Late.”

And I don’t mean to offend a single one of you because I’m sure that some of you reading this did this very thing with the voting and the sticker and the “ImWithHer.  And I love you all.

But I had been going around for about 6 months by then telling people that unless people got on board, Hillary simply was not going to win. She did not have the excitement or following needed to win this election.

I was pretty much always called a conspiracy theorist for this statement. A term I have come to take as a form of compliment, regardless of how it is meant.

But in the 9 months before the election, I noticed a trend developing:

Republicans stand by Republicans. NO MATTER WHAT. Let’s repeat that for the people in the back. They vote Republican no matter what.

Most of the people I knew on all sides of the political fence did not want to associate with any party. And certainly not publicly.

On the same note, the lawns of all my Democrat friends remained empty and free of yard signs.

Their Facebook feeds full of were gluten-free pasta and how to make Play-doh, but never about Hillary. I had many friends share with me privately that they felt that politics shouldn’t be on social media.

That is until voting day, when everyone had just assumed that she had already won. THEN everyone could stand behind her and cheer for what was supposed to be a historic day for America.

But I knew that wouldn’t happen. I was hopeful, don’t get me wrong. I’d take her over Trump in a heartbeat. But she wouldn’t win and I knew that.

Why? Because to win at anything, especially something so big, you need excitement. It doesn’t even need to be good excitement.

A big part of why Trump won is because he created a lot of stir and his name got said a million times. That guy got painted up one side and down the other, far and wide across America, every time he did anything. The media multiplied it. And then my Democrat friends (who never posted a single positive thing about Hillary) would share how terrible Trump is, and put another quarter in his jar.

If you want to win anything, you need to draw a crowd. Trump did that. And then he rode in on the coattails of a lot of people who vote Republican NO MATTER WHAT.

Whether your goal is the presidency or the cheer-leading squad, most of the real stuff happens before the big day. Before the voting even starts.

We all know that if you want to make the cheer-leading squad, what really matters happens in the cafeteria at lunch, and has to do with what party you were or weren’t invited to on Friday night. And what everyone is saying about you, or if they are saying anything at all.

What I saw was silence from so many of my Democratic friends. For so long. The desire to remain unsticky and stay the hell out of it.  I saw the need to not create waves and keep Facebook free of drama and ultimately the need to sit back and the hope that it would all just work out.

You could almost tell yourself that it’s important, or even honorable, until Donald Trump becomes President. And then it becomes irresponsible.

We tell our children daily that they don’t get anything done by sitting by silently ignoring the dishes or letting a kid get bullied. Nothing happens if we are merely waiting for something to happen. And yet we let “politics” drop off our list of battles worth picking, and stand by the excuse that we vote once every 4 years.

We have one vote, and we should use it. But we can no longer sit by and think that is enough.

Embed from Getty Images
I feel such a connection with Standing Rock.

I couldn’t tell you a specific reason why. Not exactly, anyway.

I haven’t been there. I don’t know anyone from there and I have no magical story to tie myself to that windswept land.

And yet, I feel drawn and connected to what has been happening there.

Maybe it’s because I’ve been paying attention, and relying on the “alternative media,” who DO consistently report and inform on this situation.

Or maybe it’s because in Standing Rock, the people call themselves Water Protectors.

When I was 19, I got lead poisoning from our city water. Because it was a small (and predominantly white) town in 1990’s America, this problem was resolved swiftly. A few elderly people died and many people got ill, and that’s all it took for the town to spring into action.

Unfortunately for me, I am a big water drinker, and as I felt worse, I ate less and dropped every liquid but water. And I got sicker. We were sent home from the doctor several times, being told that everyone had a bad flu bug that was going around.

When we found out that I actually had lead poisoning, I weighed close to 90 pounds. It took me 2 years to get back to a normal weight and to grow out of child -size clothing. It took much longer to trust water or food and feel normal with it. In fact, it’s still a struggle at times.

Lead poisoning does not go away. Not entirely. It remains dormant and symptoms can reoccur when conditions are favorable.

I need more rest than most people. I have nerve deafness in one ear. And I have a pretty terrible short-term memory. I make a lot of notes and lists, but this does not help me keep track of say, a Pickleball score.

But it’s made me reasonably wary and suspicious of anything that endangers our water supply. Because we can’t live without water. Not for more than a few days. Our bodies are made of mostly water. And our groundwater is disappearing, and a lot of it is already toxic. And we have no Plan B, or Planet B.

For so many reasons, our water is growing toxic. This is a researchable fact and you can go find it yourself. I’m giving you the benefit of the doubt that you aren’t lazy, or ignorant.

It is widely taken for granted that clean water magically comes up out of the ground. Until I no longer had the luxury, I took water for granted too.

The Water Protecters are trying to save the water for all of us. Whether you believe it or agree with it or not.
Either way, toxic water will effect us all, and all of our families, if we do not act. If we do not take a stand before the water is undrinkable. 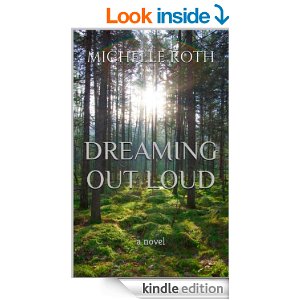