I know, right? I don’t even know how that happened so fast…

So we’ve been taking advantage of the weather and walking to school while Brice rides his balance bike.  He hasn’t quite figured out the pedaling thing, at least not in any way that would enable him to ride a regular bike to school, so we got him a larger balance bike for now. And you know what? That kid can fly! 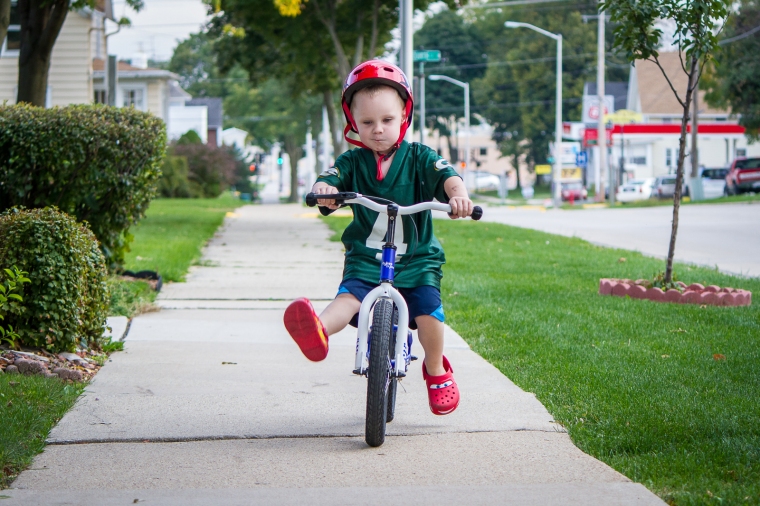 He coasts along with his feet out, his bright red Lightning McQueen Crocs splayed out while he intentionally swerves the bike around. His big red helmet on his head. He calls out to people as we walk, thanking cars for stopping at the crosswalk, or yelling good morning to everyone we see, even when it’s afternoon. He makes people smile with his genuine love of life.

It is somewhere around the time that we near school, though, that I start thinking about how Brice isn’t exactly “cool” in the traditional sense. We see a 5th grade boy raising the flag and Brice runs to the kid screaming, “Good morning, Lunch Buddy!”

And Brice says, “His name is Lunch Buddy!”

I worry so much that someone will tell him that he isn’t wonderful the way he is and that he should change so he can be better. Because right now, it hasn’t even occurred to him that he “should” be anyone else. I worry about that seed of doubt being planted in his carefree, loving little heart.

Somewhere along the way, we get shaped and altered and trimmed and changed by our lives. Because of what we want, because of what we don’t. To fit in, to stand out. A tide of people-pleasing that we could coat ourselves in until we don’t know who we are anymore.

He rides his balance bike because he loves it and he doesn’t worry that it isn’t good enough to use. He wears the clothes and shoes he likes and that feels comfortable in. He eats hummus with a spoon for snack because it’s his favorite food. I pray that no one starts telling him those things aren’t right.

Because those things are him, before anyone told him who to be. And in my mama heart, I pray that if anyone tries to convince him he needs to change, he wouldn’t believe them.

Lincoln has been shrieking. A stupid loud, high-pitched noise that could make your ears bleed. He lets these rip for 20 seconds at a time, for a variety of reasons. It’s become like a habit. I’m not ashamed to say this to all of you: I HATE it.

I do. It’s like nails on a chalkboard. All the nails in a 2nd grade glass. Like that.

I don’t know when it started. Weeks ago, maybe? A month? A loooong time. And it only gets worse. He’s gotten smarter and he knows how to use what little devices he has in the world. So now the shrieks are a weapon.

In the midst of preparing to have my ears removed to solve this problem, I heard my mom say, “Just ignore him. He’ll knock it off.”

I hear her, in her nonchalant way, because with kids she just knew what to do. And I instantly knew that she was right.

She does that, tells me what I need to hear when I need to hear it. Little things, like how to finish a recipe that I can’t find or how to stop a 5 year old (momentarily, anyway) from being annoying. Or big things, like how to find my way when I feel lost in this roller coaster of life. I am convinced that she is still with me. Convinced in the same way that I know that the sun will go down this evening.

And the best part? As I miss her less, I feel her more. Like she could call out to me anytime from the next room.

And I won’t say the shrieking has stopped, but it’s wayyyy better.

My husband and I spend a lot of time talking about changing the world. We talk about what we can change, and it often feels like we can’t do nearly enough.

There seem to be so many problems these days. I peek out of the window of my blessed, wonderful little life and I see a lot of trauma and drama and sickness and sadness and hatred out there. We pay to stream it into our homes 24 hours a day in 3D Technicolor, in the interest of being entertained and informed. We practically bathe in it.

But for being so connected and up-to-date, we are more closed-off and critical than ever. I see far too many examples of how we are downright terrible (to just plain not very nice) to one another these days. At least all the people outside our little circles and families. Those who aren’t our people.

Did you just roll your eyes at that? It’s because you’ve forgotten.

Maybe we do remember and we want to help,  but what can we do? When we’re too tired to shower and the kids’ lunches still aren’t made and it’s all just hard enough already? It feels like we can’t possibly do enough.

But I don’t think we change the world by huge sweeping gestures. Maybe sometimes, but I think that’s the rare exception, like a winning lottery ticket. I think most of the time the world is changed by small and honest little acts of kindness.

It would be easy to get caught up in our feelings and spread political memes like peanut butter all over the social networks and say we’re doing our part. And it is important to speak our truths. But is that doing anything? Saying is not the same as doing.

So what can you do, today, to change the world?

Hold open a door. Tell someone, with every fiber of your being, that you hope they have a nice day. See what happens when you say it like you mean it.

Catch someone’s eye for a moment and tell them you know what it’s like, whether “it” is dropping the contents of your purse on the floor at Kwik Trip or a toddler meltdown in Aisle 4. (Aisle 4 is always the cookies or candy. Aka, the meltdown aisle.)

If we spent even 5 minutes a day doing or saying something nice for others, we can make a huge difference in the world. Why? Why would that 5 minutes mean anything? Because people have a tendency to follow the good stuff. Meaning, that shit spreads. They pass it on. They pay it forward.

Go out and share some of your unique goodness today. Say something nice to a stranger. Do something nice for a neighbor or friend or someone you can think of who needs it. Do something just for the doing (as opposed to the telling or the wanting something back.) Just go put something nice out there, like a gift on the steps of the universe.