I’m not ready to put down my pencil just yet.

There are too many answers that I didn’t get.

I need a little less pressure

and a little more time.

I am trying to lead.

I am trying to learn what is true.

I’m trying to be what you want and I need

but we all have

a little more homework to do.”

We played this song at my mom’s funeral, because it fit her in so many ways. She was someone who gave people the benefit of the doubt, and a lot of space to be who they were because she believed that we are all works in progress. And this was the last song that she saw the girls perform in our high school auditorium. That was back in August, the closing number of the FOG show. After so many dozens and dozens of times that we sat in that auditorium together over the years watching the girls grow up one performance at a time, that was the final time. The last song. I was holding her hand and we were all crying, Steve included. It was Georgia’s last performance on that stage before she headed off to NYC for school. It was the final number of the first show that Georgia ever directed. It felt like a big moment. I remember that so clearly. I felt like a wreck for reasons that I didn’t fully understand in that moment.

So the song has lots of meaning already. I listen to it whenever it shuffles through on my music player (we bought some music to play in the background at my mom’s visitation. A funeral playlist, my girls called it. Sigh.) I realize the song means more now than just those memories. It’s interesting how time and space can give us so many ways to look at something.

The end of my mom’s life was hard. She was in pain and sick and suffering for the last 2 months of her life. She was having a pretty hard time before that, too. But those last months, I spent so much time going to see her in the nursing home. Taking her what she needed, brushing her hair and trying to help find foods she could eat. Paying her bills, making sure her medications were right. But mostly, watching her die. I knew that she wasn’t going to make it, even though nearly everyone had their hopes up. But I didn’t. She’d been talking about dying and her wishes for when she passed in detail for quite a while before she fell and broke her pelvis. I knew when it happened that we were in the final part of her life. We had reached the back of the book.

And that is how it felt, like I was trying to gleam some closure from that time, as if there had to be some answer there if this horrific thing was going to take my mother and make her suffer. But I didn’t see it, and time was running out.

I spent that time trying to follow her lead and let her feel what she was feeling, trying to take the lead and keep her spirits up and do everything that needed to be done. And then, when it was clear she was dying, trying to openly talk with her about that, since no one else really could handle her talking about her death except myself and my daughter Holly. And the dying need to have their say, I’ve found. Even if it’s just to talk out loud without saying much of anything except to acknowledge it all.

So I spent that time trying to be strong for her, telling her it was okay. Trying to figure out what the hell to do and how to make sure her wishes were followed. This is easier said than done with the current system we have set up for the dying elderly in nursing homes. To say they are cast off to die out of sight is an understatement. So I jumped through hoop after hoop and wished I had more time to spend with my mom and less on the phone screaming to get doctors or hospice or insurance to listen. Two months have passed since she died, and I realize now that my shoulders were pretty much attached to my ears during time, in a constant state of stress and anxiety. And how death, as sad and terrible and frightening as it was, turned out to be a relief.

I went out to my mom’s grave today. It’s her 69th birthday. The entrance to the cemetery wasn’t plowed so I just parked on the road and looked at where she was buried. I figured it was a sign that I wasn’t supposed to go stand there in the bitter cold in a spot where she isn’t and be sad. She told me that so many times. Don’t stand around feeling sad at some cemetery. I won’t be there. I’ll be with you, always. I have to believe her, and believe that she blocked that drive on purpose. So I told her happy birthday, I let myself have a minute to be sad and I turned my van around to go on with my day. I will make her favorite dinner for my family tonight. We’ll have cake and celebrate her life.

I still struggle that there has to be answer in all of this. We all try to avoid death so completely, as if getting too close may rub off on us and we’d rather just indefinitely dodge the inevitable.

But if there is something to be found in the back of the book, it seems to me that watching a parent die is a glimpse. We are all mortal. We have limited time here to live our lives. How do we want to live them? What are we doing with our day? Right here, right now, since that’s all we have anyway. And of course, the not-so-subtle reminder that we in fact have a life. And we should not stand around some lonely place feeling sad over what is gone. We should go out and live our lives. 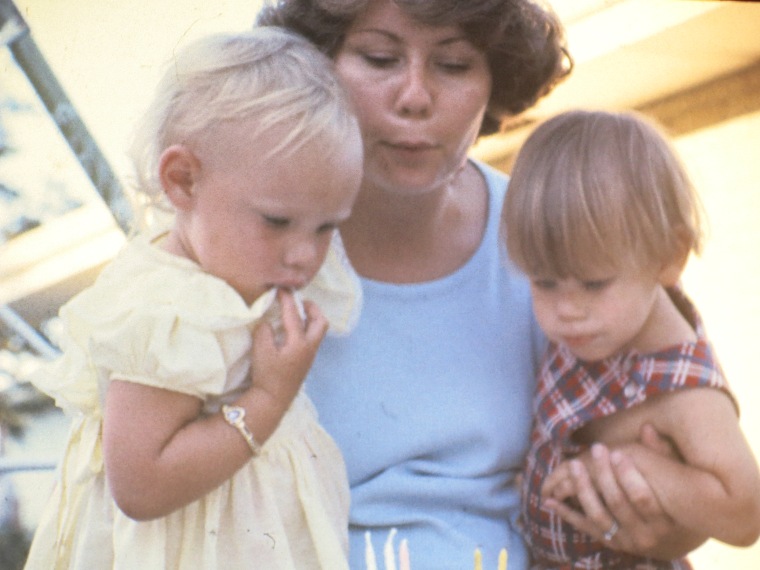 Happy Birthday Mom! I hope there is cake.

I started a weekly blog post a while ago called Meet My Mess Monday. Unfortunately, it got lost temporarily in some busy times.

The basic idea is simple: we all have messes in our lives. Literal messes and figurative messes. Emotional messes. Whatever. We all have all kinds of messes. And that really is okay. It’s normal. But we have this tendency, especially as women and mothers, to tuck the mess away. To not only not share it and make it normal, but to feel shame around it. In fact, to clean it up before anyone comes near the house and never speak about how often (or rarely) we change our sheets or how high the pile of dishes has reached. Or we hide away our dark and sad stories rather than risk our friends uncomfort, or worse, take the chance that we will make ourselves unlovable. We think that the tidiness of our homes and our headspace equals our actual worth in life. And that isn’t really true. In fact, it’s downright bullshit.

Mostly, it’s about how much time we have, what is going on for us in our lives at the moment. What’s on fire today that needs my attention the most? That’s my qualifier for what I deal with. The rest is going to have to sit until I’m ready. Figurative messes and literal. Both. It all comes down to what’s on fire today.

So my mess for this Monday? It’s self-inflicted. Totally. It’s even an unnecessary mess, meaning that isn’t like laundry and vacuuming, which I have to do. This was a chosen extracurricular project. I know, smart, right?

My husband and I bought a house this fall. A very beautiful, huge and amazing 118-year-old house. It’s in great shape and we don’t really have to do anything. But, you know, it’s ours. And there are things we want to do to make it ours. We have tackled a few things. We took out bushes in the front yard. We planted tulips and hacked down weeds. We’ve done small projects inside.

Then there are projects that we talk about in theory with words like, “someday”. Turning the attic into a master suite. Painting the basement or third floor bedroom. Or ripping out the carpets. We joke all the time about taking the carpet up on a whim. Like, “Hey, the kids are in bed at 8:15 tonight! Let’s rip out carpet!” Of course we don’t. But I suppose it was inevitable since we kept talking like that.

See, the whole house is covered in carpeting, which is covering hardwood floors. The carpet is not in bad condition. It’s fine really. But it’s also in the bathrooms, and that grosses me out. Cause you can’t really get those carpets clean, right?? And since it was icy out yesterday and we didn’t want to risk driving to Madison, we decided to rip up carpet in our bathroom. Just like that. 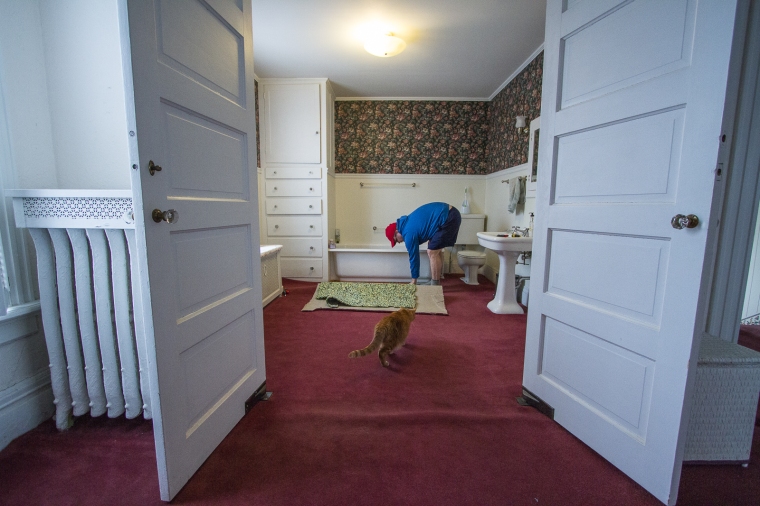 We got what we needed from Menards and pulled all of the carpet out of the master bathroom. That way, if it was a huge project with more work than we’d planned on, it would be out of reach of the kids. We have five bathrooms in this house, so the master is strictly for Steve and me. I’m not sharing, so it was the perfect place to start this adventure.

As it turns out, there are not hardwoods under the carpet.  Well, there are, but first, there was linoleum.

And a bunch of paper that didn’t want to come off the hardwood floors completely. So…

Well, no. Not really. That shit is covered by a tarp right now. I have to be able to move around. I’m not sharing a bathroom! Cause, you know, I’m not crazy.

But someday soon, after the use of a steamer and some more scraping, it’s going to be lovely. And ours.

There. Feel better about your pile of dishes???